NEW YORK — There was a real moment of inflection recently for me in how I think about the coupling of the legal industry and Blockchain. Having been involved in Bitcoin since 2011 and an evangelist on the topic with dozens of talks in the U.S. and Europe, I found myself in a very surreal place at the recent Consensus 2017 event.

I would describe my time there as a seminal moment as it pertains to the technology. Consensus is the largest conference covering all things Blockchain in the US with approximated 2,500 attendees.

Of the hundreds of conferences and events and I have attended over the years, there has not been a place with as much genuine euphoria as there was during these three days. Certainly, the fact that newly minted millionaires were everywhere did not temper the mood (more on that in a moment). There are a few reasons for this abounding palpable elation which I will detail below.

Blockchain Has Arrived in Legal

There were a host of companies that where sharing their wares. Some were vaporware, others left me as thrilled and warm-hearted as a father seeing their kid walk for the first time. One example, coming from Deloitte, most clearly demonstrates the cusp upon which the legal industry now finds itself.

Deloitte took their first toddler steps in advancing Blockchain in legal, and I was in awe. They were able to take contract automation software, write a contract and load it onto the Bitcoin Blockchain. This is a concept I had tinkered with myself while coding at Thomson Reuters last year, but Deloitte has since made my childish dream into a reality.

The example used in the demo involved taking the process of drawing up a lease between a landlord and a tenant. The lease agreement had a GUI (General User Interface), or a simple questionnaire which would fill in basic information about who was to rent the fictional apartment on the Upper West side of Manhattan. My name, current address, date of move-in and move-out were automatically populated into the document with the contract automation software. Once the tenant and the landlord agreed to the terms, a button was presented to digitally sign the document — creating a hexadecimal hash (a string of letters and numbers unique to the document). That unique string was then saved to the Bitcoin Blockchain.

If either party ever wanted to reference that document again they could use their private key (another string of numbers and letters) to verify the contract details. If even a lowly comma were to change in the document, the entire hash would be invalid and the document rendered null.

Witnessing this demo was groundbreaking for me and something most transactional attorneys will need to be familiar with soon. There are loads of theoretical examples of how Blockchain will work, but not as many significant current implementations as of yet. As I have been promising, with little tangible proof until now, this will be the initial use of Blockchain technology that all firms will be adopting in the not too distant future. 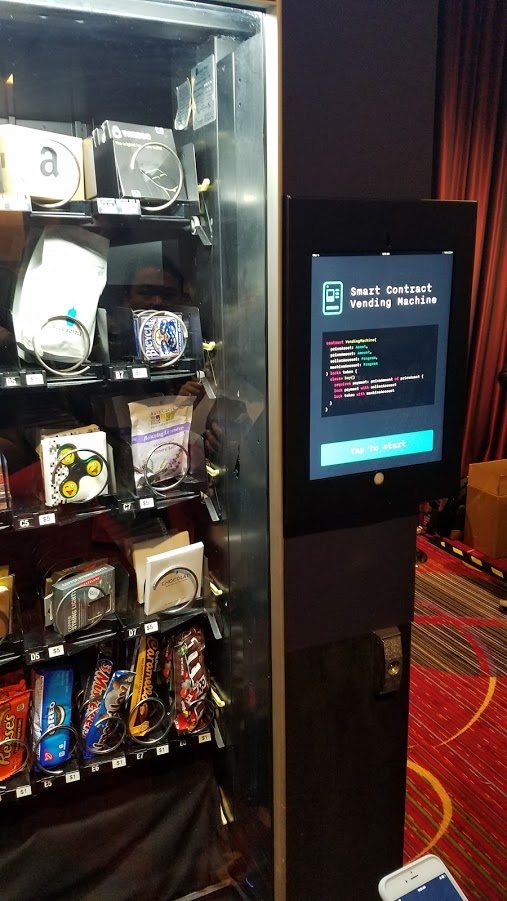 The other main theme at the conference was “New Money Everywhere”. The money is coming from Initial Coin Offerings, or ICOs. This discussion around ICOs permeated nearly every conversation and session held at the event. While I had watched ICOs over the last eight months, I had not bought into the idea completely. For background, the ICO is essentially like an Initial Public Offering (IPO) whereby in the a company raises funds by going public via an offering of stock to the public, usually through an investment banker. That stock is then listed and publicly traded over a public exchange; the company must also register with the Securities and Exchange Commission and make regular public filings.

With the ICO, however, a company raises funds via their own website in a crowdfunding-like manner. Often, they post a whitepaper describing their business and how they plan to use the funds — not unlike a IPO’s initial documents. The magic here is that the fundraising leverages the Blockchain to store the information about who contributed, how much and when. The process of storing the aforementioned information securely on the distributed ledger uses “Smart Contracts” which is an enormous development in this space (again, more on this later).

Current regulation in the space is generally non-existent. However, to avoid the suspicion of impropriety and any confusing regulations, companies have designed it so that if you wish to invest, you “donate” your funds via Bitcoin or Ether (the second most popular cryptocurrency). Once you offer your Bitcoin to them you are typically given shares in the company referred to as “coins” or “tokens”. Those electronic coins bought at the ICO rate are eventually listed on publicly traded cryptocurrency sites.

Recently, this is where the mania has ensued, and the millionaires flush with digital currency dwell. Often investors see a huge bump in price when their coins hit the exchanges, followed by a seesaw movement in valuation until the next ICO is released. Traders tend to be fickle as they move in and out of flavor-of-the-month coins and onto the next shiny ICO. These offerings now seem to happen multiple times a week compared to handful a month last year. 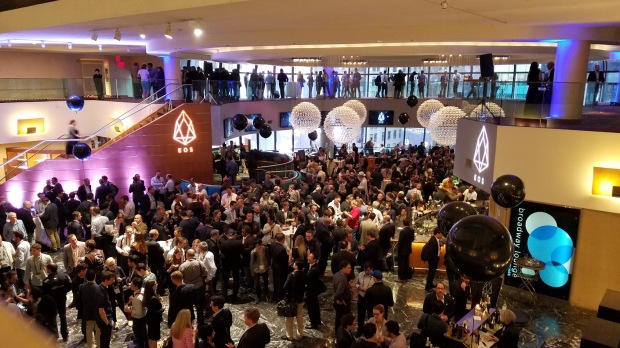 Typically, these ICOs have an open window for people to invest for a week or two but one company called EOS which specializes in “Decentralizing Everything,” will have their ICO for the next 360 days. When making a donation to invest in the fledgling company they offer rather large numbers of digital tokens for Bitcoin or Ether. In the example of Civic, which is a secure identity platform, they requested US dollars for their token, called a CVC, at a rate of one token for 10 cents, with a typical order of $1,000 netting the buyer 10,000 tokens. As an order of magnitude, people that bought in would have made seven times their money in about a week, as the currently CVC token is now valued at 70 cents.

The amount of money invested in ICOs is remarkable. While at the conference, the value of all companies’ combined tokens or coins was pegged at more than $100 billion dollars! This valuation was in the few billions not long ago. Put another way, all of the companies who have launched ICOs are worth more than Morgan Stanley at $78.3 billion. according to current stock valuations.

As you may have gathered, there is tremendous opportunity with ICOs for law firms, in-house counsel and government agencies. Blockchain practices within law firms have emerged across the globe, specializing in assisting companies with the process of the ICO. Cooley, PerkinsCoie and Holland & Knight are three innovative firms that have highly specialized attorneys working in this space.

The amount of money invested in ICOs is remarkable. While at the conference, the value of all companies’ combined tokens or coins was pegged at more than $100 billion dollars!

Also, many regulators are carefully watching from the sidelines which was a point of discussion during the event. To that end, some firms are providing guidance in areas considered confusing for all parties: Federal and State money services law, privacy and security, Intellectual Property and Money Laundering as it pertains to these cryptocurrencies and to Blockchain.

While the eruption of these coin offerings are in general considered to be very positive, lately there have been some challenges. Not unlike what happened during the dot-com IPO boom of the late-1990s, the ICO market is increasingly seeing potential phantom companies that are trying to leverage this mania to turn a quick buck without a real business case. In the coming days or months we will likely see an ICO go very wrong, resulting in thousands of people losing millions of dollars and ultimately upsetting the entire ecosystem.

At that point, several aspects of the legal industry will begin to take shape — first and foremost, there will be a call for regulation both domestically and internationally. Beyond that, I would foresee possible class action lawsuits following, also not unlike those that followed the dot-com bust of the early-2000s. Recently ICOs have strictly forbidden citizens of some countries (mainly the U.S.) from participating in their offerings for fear of lawsuits.

The Initial Coin Offering is an incredibly exciting use of Blockchain technology for business and individuals. The Blockchain’s use of the smart contract to record information, execute actions securely and in a distributed manner is revolutionary. At this moment in time, the technology slashes the middle man in what was a very profitable business once reserved for the big banks and whale investors. With that said, we are in early days — so while billions of Euros, Dollars, Yen and every other major currency races toward these new company ICOs, the legal industry is charting a path to assist… or eventually, help sort through the wreckage.

Joseph Raczynski Technologist/Futurist Joseph is an innovator and early adopter of all things computer related. His primary focus is around the future of technology, and speaks globally about Cybersecurity, Blockchain, Artificial Intelligence, Cryptocurrency, and Robotics (drone technology). He also writes about the future of technology as it impacts the crossroads of our personal and professional lives. Joseph founded wapUcom, LLP, consulting with companies in web and wireless development. As a side project DC WiFi was created to help create a web of open wireless WiFi access points across cities and educate people about wireless security. Currently Joseph is with Thomson Reuters Legal managing a team of Technologists for both the Large Law, Corporate, and Government divisions in the US. Joseph serves the top law firms in the world consulting on legal trends and customizing Thomson Reuters legal technology solutions for enhanced workflows. He graduated from Providence College with a BA in Economics and Sociology, and holds a Masters in eCommerce and MBA from the University of Maryland, University College. You can connect with Joseph at JoeTechnologist.com or JosephRaczynski.com or @joerazz

This site uses Akismet to reduce spam. Learn how your comment data is processed.

Law, Justice and Development Week 2019 – World Bank Week: Justice for All? The Impact of AI and Blockchain on“Legal”

The 2019 Corporate Risk, Ethics & Compliance Forum – The Internet of Things (IoT) and Cybersecurity: Is Your Phone Hacking Your Company?

The Metropolitan Club of Chicago,

Knowledge Management Forum 2019 – Emerging Technology and the Challenge of Data

Symposium On Artificial Intelligence and the Law – 5th Annual Conference of Brazilian and American Judges – AI in the  Legal Profession: Present and Future

Pier One Hotel in Sydney,

Generate 2018 – The dark side of the internet: How to avoid traps and maintain cybersecurity

Generate 2018 – Blockchain: The challenge, the reality and the opportunity ahead

Financial Services Forum 2018 – The future of business and innovation

2018 Public-Private Partnership Forum – Understanding blockchain technology and the impact of cryptocurrencies on the legal, financial, and regulatory markets.

ILTACON 2017 – INNOVATIVE APPLICATIONS OF BLOCKCHAIN IN LEGAL INFRASTRUCTURE AND BEYOND